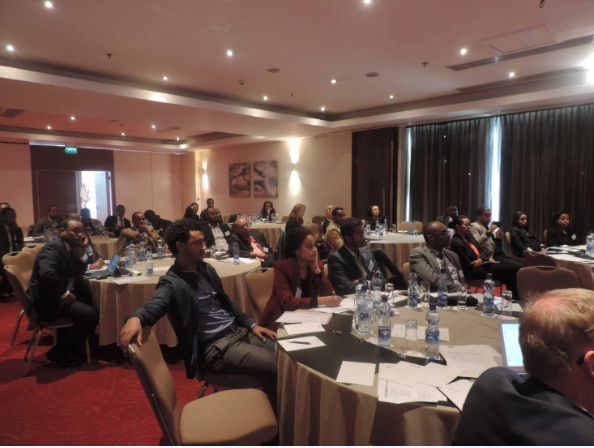 Last week Thursday, 7th September, Enterprise Partners hosted a workshop for banks and others involved in Digital Financial Services (DFS). The findings of its Assessment of Transaction Pools for DFS.

In this third blog: How to build scale in DFS in Ethiopia? According to the field-findings and recommendation of the consultant, Anne Marie van Swinderen.

The research team, Mekdes Hailegiorgis and Frehiwot Sinishaw, presented some of the stories they had heard from the 38 respondents during the four months interacting with them. One of the stories concerned a small holder farmer who L-IFT assisted to sign up for M-BIRR through an MFI branch. While on the one hand the farmer was excited about having this interested new digital form of storing money and making payments, he said he was really scared about being the only one in his village to have this innovation. He felt very uncomfortable about it and explained it would have been much better if they had adopted this new system as a group of people from the village.

Indeed, other respondents also mentioned that they would not want to use such a new form of money until other people had experienced it and they could follow their advice.

Mekdes and Fre noted that people were quick to understand about this quite abstract, new product. With some careful explanation, all the 38 respondents could understand, including those who were illiterate and those who have no phone. Mekdes said “They advised us that they needed similar practice… In our opinion, the most respected and trustworthy people should be first trained as they will be the best way to spread the word for the community. If people are supported by a trusted person from the community starting to use digital finance will be easy. At the beginning of the training, they would need a lot of hand holding and showing them practically, so it is good if they can ask a trusted local person.”

In the field findings trust emerged as a crucial factor without which digital financial services would not stand a chance. Many of the respondents had had negative experiences with financial service providers resulting in lack of trust. ATMs had not given money, but the amount was deducted from the account, network problems resulted in long queues at bank branches resulting in one garment worker’s parents having to travel three times to town to pick up the holiday money their daughter sent. Due to this low trust, people are focused on their communities for their financial solutions. This trust issue may also be overcome if digital money is promoted through local, trusted women who can intensively assist all new users in their first experiences depositing, withdrawing and transferring money. Even though some agents are good at this type of explaining and supporting new users, many agents really have no time nor patience for that work.

The consultant recommended the audience to work Kebele by Kebele. First work intensively with one Kebele and try to convert as much as possible of the Kebele’s economy to digital. Convince people, shops, traders, electricity collectors, water sellers, everybody that using digital payments is a form of showing their loyalty to their village. To achieve these Kebeles with deep digital money usage, it is important to reward all usage. The users should get some points or a reduction in price each time they again use digital money. Those with higher savings balance should be recognized in one form or another. Likewise, the trusted local women who promote uptake of DFS should be recognized according to how intensive the people use it, instead of how many people signed up.
The Enterprise Partners’ Lead on Financial Inclusion, Maurice Koppes, added that agents’ rewards may also reflect this. Instead of only paying per transaction agents could be rewarded if their regular customers had savings balance, the higher the savings balance, the more reward.

Following the above advice may build “cashless kebeles”, cashless islands that can grow like an oil stain. This kebele approach requires relatively little investment, just one or two agents and one or two trusted local women promoters. This approach may also lead to agents quickly getting sufficient volumes to make it worth their effort.