It all began in August 2016 when L-IFT started its legendary Financial and Energy Diaries in Uganda (FEDU); I was one of the lucky ones to be selected as researcher. The team had researchers from Eastern, far Eastern, Central and Western Uganda. It started with training on how the research will be conducted using technology on Android smart phones, not carrying papers to the field this time. We started with the baseline, and later some respondents were selected according to the criteria needed by the administration to continue with the biweekly interviews (every two weeks) for some weeks, it was a nice interaction and I also learned and saw many things that happened to our community.
We recently had another addition to the FEDU research, i.e. follow up interviews. This started with a training which was held in Mbale (A city in Eastern Region of Uganda) at Pretoria Hotel, mid November 2018, then later we went to the field and we had to interview all the respondents including those we interviewed in the baseline. I managed to interview over 95 respondents. It is a nice feeling to get back and meet these people though many were not happy with me since they did not get soap and solar lanterns that were given as a reward for the biweekly interviews. But I told them that there were some factors that were followed to select those rewarded and I told them “you never know what the future holds”.
What I witnessed was that after the research, many ladies were inspired to re-join and join (Savings and Credit Cooperative Societies) SACCOs, others started home saving, others opened up a business like Miss Mukyala Fatuma who started preparing fresh fish for people to eat, and she is still doing it. Further, an unexpected incident happened to Miss Zawedde who also opened up a grocery. Her husband stopped providing the basic needs claiming that she is now “a man too” and that she can also cater for the family. She has now managed to buy her children everything they need and she is also planning to set up a shop when she gets a loan. Though the thing with the husband, it was a blow to her.
Miss Kubula said that her children are no longer suffering from eye problems which resulted from using the local light named Tadoba. Ever since they got the solar lantern things have been better with their eyes. She thanked L-IFT for the gift.
Despite the positive impacts, I also faced some challenges like people being resistant to engage in the research thinking that I came to the community to take away their children, take away their land and other properties or that I am a government spy. This was a legitimate fear because these kinds of incidents actually took place in Central Uganda under the guise of “Research Works”. . So I talked to the chairperson of each village who introduced me as a residence of Kayunga (A district in Central Uganda) for so many years and also told them that they know my family. Another challenge was that some of the respondents were located in a dangerous area (an area where a group of men who smoke marijuana were known to rape and harass women). I managed to talk to the administration and these respondents were removed from the list. Some men refused to participate and they also refused for their women to engage though their women were interested. Others used to make me help them doing domestic work as they answer my questions. And others refused to participate in the follow up survey because they didn’t get soap and solar lanterns.

Fig 1: Miss Mukyala Fatumah: preparing freshly fried fish for her customers, an income generating activity which is making her support her family and save. This was an idea that came to her after talking to me in the FEDU Research. 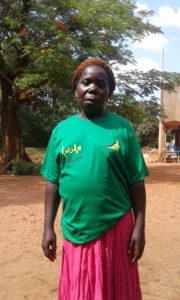 Fig 2: Miss Zawedde in her t-shirt after the follow up survey; she was so grateful for every benefit that she has acquired from L-IFT.