The Small Firm Diaries Project (SFD) is a study that focuses on small businesses, under the lead of New York University. The study has been underway in Ethiopia since December 2020. The census stage, to get a pool of potential participants for the study, has been completed (SFD Blogs – L-IFT) in February. After the census was completed, the next step was to conduct the intake survey to get more information about the businesses in order to select the right mix of business firms for the diary stage, the full year of weekly interviews tracking participant firms’ business situation. The Intake survey is composed of a few questions that give sufficient information to decide whether a firm is an appropriate and willing participant for the diaries study. The Intake includes questions on the number of employees the business has; what the ownership structure looks like, whether the manager is (co) owner, how long the firm existed etc. Apart from helping in sampling, these data also allow us to determine the demographics of the firms. The Intake contains several questions to determine whether they wish to participate and are willing to share confidential and financial data in the diary interviews.

# Sampling process for the intake

The New York University team carefully reviewed all results from the census. On the basis of this, they decided which sectors could be included and which would be dropped. Sectors that fell into 3 broad categories were selected. These were:

Accordingly, 42 percent of the sectors in the census fell into the category of light manufacturing; 12 percent were agri-processing; 27 percent were other industry whereas 19 percent were ‘out’, rejected as sectors either because they were too close to retail (e.g. internet cafés) or too few respondents (e.g. coffee processing). (See Annex 1 for detail results per sector)

The census result was analysed carefully to select respondents for the intake survey. The first criteria used was ‘willingness to participate’ which was a sine qua non criteria (this is not a gradual indicator, but a yes/no indicator – without willingness a firm cannot be considered). Everyone who said they did not want to participate or were not sure were removed from the census. Then secondly, only those who had 2-20[1] employees were considered to be part of the sample. Some features were ‘over-sampled’ meaning that these were given priority to enter the sample, since there were relatively few of these in the census. Firms active in agri-processing were prioritized and women- /co-owned businesses were over-sampled.

[1] In the end two additional firms with 23 employees were added to the sample to ensure that there were a few truly larger firms and also to serve as a comparison. However, we only included those 20+ employee firms that were managed by the owner(s) themselves. Most of the 20+ firms were managed by a non-owner manager, which confirmed the assumption that at 20 employees firms start to hire professional managers.

Each field researcher (11 of them) were assigned respondents phase by phase. They started with 30 respondents each in a ‘first round’. The idea was that in the second round another ten would be assigned, with an over-sampling based on the composition of first round firms willing to participate. In the third and fourth round the number of additional assigned samples was based on how many diaries eligible results they had (repeatedly a quick analysis was made for the question of who was willing to participate in the diary; who had 2-20 employees and the industry to determine the additional number of respondents for the rounds). After this some people were assigned additional cases from the census while others started trying to do interviews through ‘snowballing’.  The following table shows the figures for each round.

Table 1: Sample for each round

As can be seen from the table, there were 4 rounds in total. Snowballing was also tried in the intake. For snowballing the Field-Researchers enquired with eligible firms of industries and sectors which had insufficient eligible cases to introduce them to colleague firms in the same sector. For instance, the Field-Researchers revisited soap-making companies and asked them if they knew of other soap-making companies in the area that we could approach. Later on, a more general snowballing took place where Field-Researchers asked all eligible participants whether they knew of private clinics or other medical firms as well as private education companies.  These snow-balled companies were not part of the census so all snow-balled firms first got the census survey and after a firm ID code was assigned, intake took place with these firms. According to the Field-Researchers snow-balling was an arduous process with very few results. This was because the majority of the owners were only familiar with businesses in their immediate vicinity so these mostly were located in the census assigned areas and these had already been covered.

# Interviewing Process of the intake

After the sampled respondents were assigned to the field researchers, they set appointments to conduct interviews with these firms. They also presented them with consent forms in local language to confirm their willingness to participate in this interview.

The field researchers successfully interviewed 379 business firms using the intake survey (out of the 550 assigned, 371 could effectively be interviewed plus eight firms through snowballing). Like the census results, the location distribution and the sector distribution are the direct result of the distribution of field researchers. Addis Ababa has five Field-Researchers, Adama three, Harar-two and Dire Dawa one. Accordingly, the intake interview took place in four locations with the highest number of interviews in Addis Ababa (47 percent); Adama/Mojo (29 percent); Harar (17 percent) and Dire Dawa (7 percent). Regarding industry: the intake interviews with results included more light manufacturing firms (54 percent); considerably less service firms (27 percent) and least agri-processing firms (19 percent). The intention was to achieve about one-third of each industry, but this proved to be quite hard.

The field researchers had to overcome many challenges to achieve the results. The challenges are summarized as below:

In the census survey, field researchers were allowed to interview employees of the firm. But in the intake stage, they were required to only interview owners/managers. This proved to be quite a challenge because:

3. Doubts about the study

Some researchers were assigned a wide scope area which required long-distance walking with extremely hot weather. This was not easy to do especially considering the multiple trips they had to make to find the owners. This was also coupled with trouble they had in relocating firms assigned to them. (Due to the slow process to get permission to interview in specific neighbourhoods, field-researchers did not work in the exact same area for census as they were assigned for intake. So, for many firms field-researchers had to retrace a firm that was interviewed by someone else, using GPS coordinates, telephone numbers and firm names)

The following recommendation was forwarded from the Field Managers, Project Director and Team lead discussion for other countries’ SFD project implementation.

(i) Key informant interviews should be done before the location observation

(iii) In addition to the questions, we should ask Key Informants about where exactly different types of firms are located in the area and which areas have a higher density of businesses of the right industry and size.

Annex 1: Analysis of Sector in detail

the sectors in more detail

Codes for the sector 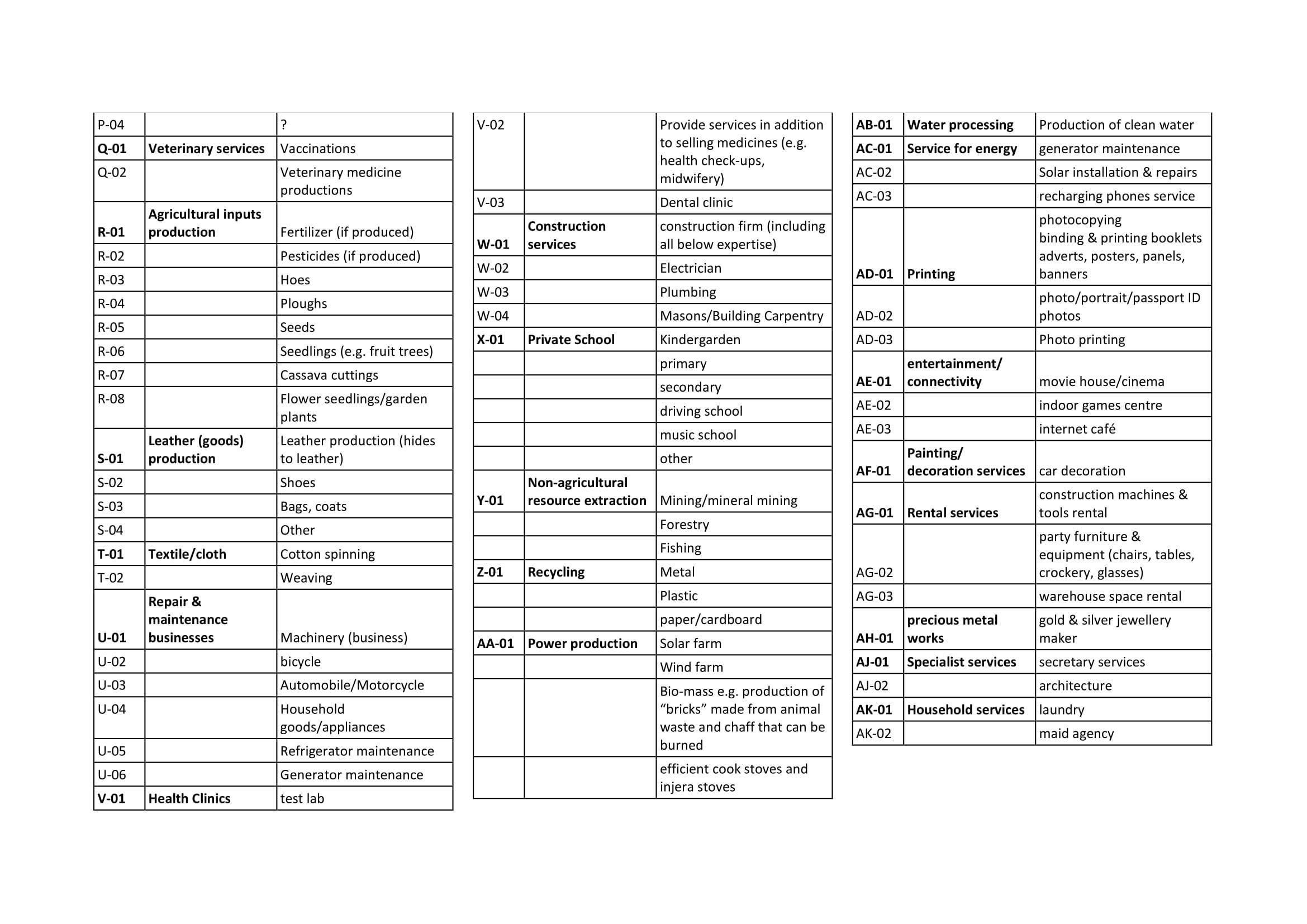