Mibaraka, 34 years old, is one of our many dedicated and hard-working researchers. He fled from his home in Congo in 2013, because of tensions and rebel activity in the area where he lived. Rebels would kidnap people, take them to the bush and kill them. Before fleeing, Mibaraka had a good life in his home country. He worked as a deputy headmaster at a secondary school and he taught French, mathematics, religion and entrepreneurship. At University, he studied Development, and more specifically Farm Management. When he and his family arrived in the refugee camp, Nakivale, it wasn’t easy for them. He started working as a secretary (his first paid job in the camp) for the local football association, where he continued to work for 5 more years; it was the only job he could find.
Eventually, he was able to be elected as a representative for PSN (People with Special Needs), where he could finally put his skills to good use. Mibaraka was first introduced to data collection and interviewing when he was chosen for a job at AIRD (African Initiative Relief for Development). When the contract ended he had to find a new job, and when he saw an application to become a researcher at L-IFT, in July of 2019, he immediately applied. With the help of the skills he learned at AIRD he would go on to be selected for the job after a training session in Kampala, where he learned the ins and outs of being a researcher at L-IFT.

Fig 1: Mibaraka Interviewing a respondet (a stay at home mother)

He has shown  a lot of motivation and initiative during his work and he is glad that he can both put his skills to use and help others in the camp at the same time. When asked what he likes most about his job, he answered that L-IFT introduces refugees to savings methods, which helps them grow their businesses and live a more comfortable life in the camp. He too learned to save while working with us, which helped him to start gathering resources to fulfil his dream: open a pharmacy in the camp. When he has saved enough money for that ambitious project, Mibaraka wants to stay at L-IFT, or  work at a financial service provider, to continue to help others with their (financial) struggles. 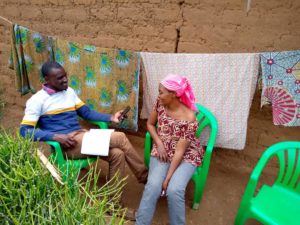