As with most of Nigeria, it’s been a rainy June and after 5+ hours of consistently heavy downpours today, my supervisor and I arrived at a muddy palm kernel oil production cluster.

The interview was off to an empathetic start as we listened to the respondent narrate her inability to recover from her heaviest loss ever in the business which occurred last weekend. She had purchased kernel sludge from a new supplier due to scarcity and increased prices and though the color of the raw materials looked okay at a glance, it cost her over 40% loss after a tedious process.

She also lamented the rising price of raw materials even when the processed product was almost dipping in price; a situation she termed “unusual”.

The respondent said she came in from the village on Wednesday. That she was in the village through the weekend till the end of sit-at-home as she explained that sit-at-home is usually worse in her village and that you won’t see a single person come out as the police arrests anybody they see and accuse them of being IPOB (insurgent group) members. 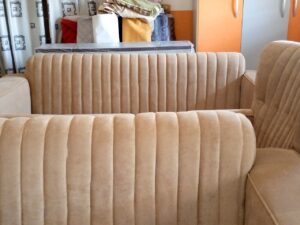 This respondent is very good at what he does as a craft with beautiful chairs and wardrobes on display in his firm and is also very dedicated to the research. He called me today to tell me that he lost his wife on Saturday 2nd of July. This is sad.

This firm has been experiencing rapid growth as stated in my last story about the firm. The firm informed me that it has paid for a new shop where it will be opening a new branch of the business.

This firm has experienced some difficulties which might affect its production in a few months to come. The plants they planted in the nursery died mostly and the seeds were very expensive. The firm farms assorted vegetables even though it farms other things on the other farm but insecurity has made them completely stop production at the other farm.

At this medical laboratory today, my supervisor and I met the respondent in a very sad mood as she lamented the recent challenges she was having with her incubator and autoclave machines which are barely 1-year old, and got grounded again even after changing circuit components as instructed this week.

She was very livid at the technician representing the vendor company that supplied her machines, who wasn’t able to give her any definite diagnostic result of the incubator.

She indicated having to devise a crude method of placing laboratory samples behind the firm’s refrigerator, in trying to simulate the heating system of an incubator.

She was able to renew the exorbitant rent amount within the week, alongside big gains in offsetting the firm’s equipment loan.

In the end, she was thankful for the airtime incentive from L-IFT.

At this furniture production firm today the respondent was delighted at the healing effect he felt on his problem teeth since using some prescribed herb/vegetable, which had saved him the cost of the surgical operation which he had touted.

He also was excited at successfully finishing the bulk furniture production work that took him outside Enugu, which had offered him the opportunity to build new client relations, while thanking L-IFT for this month’s recharge card incentive.

The respondent narrated how she has been having challenges getting new apprentices. Initially, she blamed the competitors as being responsible because according to her, they are not happy with her business progress and have been doing everything possible including spiritual attacks to prevent her from having new apprentices.

The respondent is now faced with the dilemma of bringing down her own price to twenty thousand naira or staying without apprentices when her current apprentices leave in months to come.

This fashion designer firm owner told me on this visit a new apprentice enlisted in their firm. This new apprentice is a special one as you would keep wondering why her parent signed her up to learn the rudiments of tailoring. She is Eight years old and the training takes place in her parent’s house for one hour per day/twice a week. I was amazed to hear that some parents are encouraging their children to be entrepreneurs at a young age. Then I asked madam firm owner how she juggles her work at the firm and training the new apprentice for home service. She said her senior apprentice usually goes to train the youngest apprentice at home and she had done one week as of the day of our discussion.

Fast forward to my last visit

I got to the firm owner and I met her alone in the firm which was quite strange then she said her senior and committed apprentice has been absent from work for some days and that she called in sick and when she tried to call her to check on her health, she rudely reminded her she was sick and hung up the phone. Before this time she had always told me how her apprentices are been rude to her, they come to work at will, they don’t even call to inform her if they will be absent. In conclusion, I asked how the youngest apprentices would be trained now that she is technically all alone then she said she has been the one going to train her at home and that she will survive the challenges.

I visited this firm with Mekdes during her last visit to Nigeria, when I got to the firm I asked for one of his employees and he told me he went to a customer’s house to do home laundry services, he stated that he sees laundry business as a very lucrative business which he will like to expand. Also, he told us his plans to set the standard for his business where his customers will pay a 50% down payment when dropping their clothes and the other 50% when they want to pick them up, this will reduce the customers dumping clothes without thinking of collecting them for weeks.

Also, the respondent has another line of business (Farming) which he doesn’t disclose because the business is not in the same location as his laundry but he takes money from his laundry business to fund this farming business. He told us he will not like to use laundry funds for his farm anymore as he wants to expand the laundry business in a big way and he is considering opening in other good locations for expansion.

When I got to this firm I noticed she pasted a flier on her wall advertising mobile money called Waya money, I asked to know if she has started another business and she explained that someone gave her the fliers hand bands, and T-shirt to give to people who agrees to download the application, and the person promised to pay her afterward. Also during her competition survey, she told me she wishes there was an association for her business so there will be uniformity in the price of the services they provide.

The firm owner informed me that he has been able to purchase hormonal profile test equipment from his firm’s savings. He was really excited about this because he feels this will help the firm generate more income as they won’t need to spend money running these tests for their customers at another laboratory. He also told me his plan to bring in his wife who is a medical laboratory scientist to join him in the business to handle this section of the laboratory. His wife is however presently working as a paid employee at another firm.

In another news, the firm owner mentioned his displeasure with how they lost 2 customers. The first one was because the laboratory scientist was not on their seat when the customer visited while the second case was a result of a weakness in the chemical required to run the test for the customer.

I observed 2 new apprentices in this firm today the respondent explained that they are Junior secondary school students that just finished their exams and their parents brought them for training, I further asked for their apprenticeship payment she reported that she will train them for free because their parents could not afford the payment and she is doing that for community service.

The employee that is usually around gained admission to the university, other apprentices still struggling to get the work done, and the firm owner complained they spoilt her computer and photocopy Machine just because they are still learning how to use it.

when I got to this firm the respondent was very busy with shoe production, he stated that he has a deadline for the delivery and could not answer his survey questions. Also, there was no employee to assist him.