When I got there today for my weekly report I was told this firm lost 40 birds that are laying eggs and the loss costs N140,000 in the current market price. This is due to the Cholera outbreak caused by the high water table because we are in the rainy season. The firm owner is scared but still manages the challenges head-on by providing several antibiotics for them which might damage their liver long-term and might affect their egg production.

Let me start with a good announcement, on my visit last week the firm owner was busy fixing some watches then we got talking about his firm and then he chipped in that he purchased a machine for the firm, a machine that can perform five functions on shoes and bags like an all-in-one machine. He showed me the video and gave details on how he made a payment to acquire it. Then he said “we need money to fix an iron door at the workshop, so we can bring in the machine for commercial purposes. Presently the machine is in the house.

Let’s go to the not-so-good news which is part of the challenges businesses face. Some of his employees were having accommodation issues, these are the employees who work full-time in the back end to keep the cobbler business running. Before this time he provided shelter for them while they go to their own houses on weekends to return to the new week, but they were chased out of the former place now they don’t have a place to lay their heads after work. At first, the two employees affected were managing somewhere but it wasn’t convenient. It would also cost much for them to be coming daily from their houses. The firm owner told one of the staff to go home while he gets another place of shelter. Then he told the other staff that he will be paying him his transportation fare daily to come from his house to work, but the staff told the firm owner that he would manage at the place that seems inconvenient while the firm owner sorts their accommodations issue. Getting here today, I learned they are going to check a place where they will be staying today. This singular challenge has affected the income of the firm as some customers are coming to retrieve their items when the firm can’t deliver them.

Its several functions are

It can be used on bags and shoes

At yesterday’s session in this business center, the firm owner relayed his gratitude for the consistency of the airtime incentive which according to him was after a challenging week in business.

The financial tools and other Assets survey session saw him talk excitedly about his latest purchase; a Belgium (fairly used), desktop photocopying machine, which he ingeniously tweaked today to successfully serve triple functions as seen below. 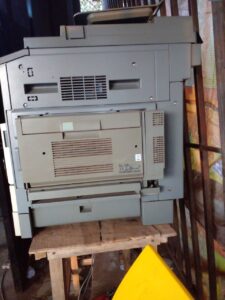 Yesterday was the first time this quarter at this rice processing factory that I presided over a session comprising both the firm owner and co-owner (the latter has been most prevalent recently), and I had met the couple discussing alongside diligent oversight.

I started with this month’s financial incentive from L-IFT, which made them feel some glimmer of relief in what would be a long and engaging session ahead; they had afterward discussed their recent field survey which yielded that a new and similar firm opened very close to nearest major market was responsible for their reduced patronage in recent days.

Alongside financial reporting and the Special Events survey he recounted how minor damaged joints on the major destoning unit had cost them resources since April until he, last week, after personally studying the joint patterns on the unit, devised a permanent and cost-effective solution.

After further soliciting their commitment to helping me page their most forthcoming and frequent supplier for the Suppliers survey, I took the rest of the session listening as the firm owner pitched a very thriving melon de-husking and process model he was working on, which with a 2-million naira (4545 USD) soft loan repayable weekly in a maximum of 18 months, would do the firm a great deal of diversification, getting them running at an envisaged 50% capacity, in lieu of the harvest and storage season ahead.

This respondent got a loan offer but is worried about taking it because this is the rainy season and he wants to use the loan to make gates and doors and displays. He is worried he may not sell off the doors early enough to repay the loan without getting in trouble.

The respondent said their machine (crusher) has been having issues consistently lately and that it first broke down and they fixed it, then they had to do some servicing this week and that now it has dislodged from its fitting to the floor so they are waiting for the person that will fix it. She also said business remains dull

The respondent said she just experienced another bout of extortion as Enugu State Waste Management Authority (ESWAMA) people come around and said her annual payment is late so she will pay N5000 as a default fee and she ended up giving them N1500. Respondent also said new terms usually come with a lot of buying and maintenance so she has had expenses but not income. One of her employees also resigned and got another job in another school that pays more.

This respondent has about 2 microfinance banks he saves money daily (Monday-Friday) from his sales. Representatives from these banks usually visit his firm to pick up the money and sign on the card provided to them and the amount deposited. One of these banks is owned by his landlord so recently he noticed the lady who usually comes around to pick up money from his firm stopped coming for a week. He put a call to their office to complain and he was told the lady has defrauded so many of their clients and hasn’t been remitting the money she usually collects from business owners to the bank, and no one knows her whereabouts as she stopped coming to work. And this firm has about N150,000 saved in that account.

The firm owner is not bothered because that’s his landlord’s MFB and the purpose of saving money there is to pay for rent.

I observed there were no production activities going on when I visited this firm and the employees are not around as well. The firm owner explained that there was no production and as a result of low patronage, the employees only come around when there is work to do in the firm.

Sometime last year when a question was asked if the firm owner pays himself a salary. This respondent said no but that he would like to do that. I got to this firm and I observed he has included his name on the payroll.

Even though it has been difficult to meet this respondent for a while now. I found out that the property they have used as the farm which also has their house will be divided into four different blocks. The property belongs to the institution the owner works at and they hoped they would be allowed to purchase the property in some years to come. However, this new development came as a shock as it seems more than 70% of the farm will be carved out leaving them with so much loss. Mind you it is the same firm that has not recovered from the rain storm that affected their greenhouse worth a million naira plus.

This firm seems to have experienced growth since we started the study. This is an extension they build. The owner wants to buy a dryer and place it under the extension. This will help dry the feeds faster.

I stopped by this firm to get some updates on the special event survey and I noticed he was working on his car. He stood up and said: “Kemi, I am selling this car, I need to get a place where I can display ready-made furniture, no matter how small. I am suffering here with no regular sales, if selling my car will get me some money to rent a place, I will be glad to have a place to showcase and sell off ready-made furniture. I will make them here and move them for sale at the new place.” His passion captured my heart. This is a typical characteristic I notice in most of my respondents. They are passionate about their businesses and want them to thrive regardless of the challenges. 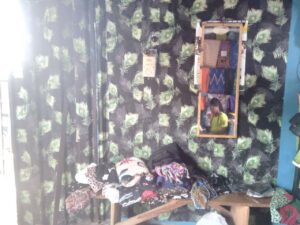 The respondent installed wallpapers in her shop. Said she wants to bring her shop to the aesthetic standard she wants. She also plans to be using the wallpaper as the backdrop for snapping her work and posting on social media.