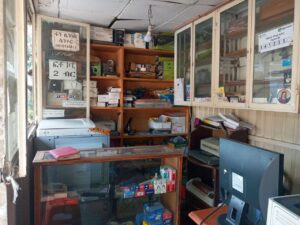 Writing and Copy center
This respondent is 38 years old married man who has 3 children. Before he started this work he was Bajaje driver he entered to this firm incidentally. Earlier, his sister-in-law was the owner of this firm when she got a chance to went abroad. she decided to go after she sold it then when he heard about this he asked her to sold it for him then she agreed and sold it for him. Even though, she was his wife sister he told us that she counted and sold every piece of material including paper to him.

Among the materials he bought were :
Iron sheet house in 20,000 ETB
7 Computers in 32,000 ETB
Copy machine 20,000 ETB
Printer in 2,500 ETB
2 Chairs in 2,100 ETB and other different materials in 60,000 ETB; generally he costed more than 150,000 birr to bought this firm and materials within it. After he bought the key, the kebele administrators tried to evict him; they said that the land would not be sold or exchanged. But the main reason they want to expel was to give the place to the manager’s wife. He tried to solve the problem by his own, but they did not accept that. So he solved the problem by telling his brother’s friend who was a government official.

Including him other two workers, the former owner secretary and copy worker began to work there.
He passed through difficult periods at the start of his business. After the pervious owner left, her clients were dispersed and as a result, they suffered greatly from a lack of customers. He told us that he was earning less than150 birr per day and even at that time he received money from his brother to pay employees wage. He remained in this situation for about 6 months but after that he started to enter in to the market by participating in various tenders and hiring a better staff.

Then gradually, he began to work different types of contracts then the work started to go well.
He told us that although he is not happy with this job now, but he is happy to be able to manage his family and children with this job and in the future he intends to be more involved in the auto parts business outside of this job.
He told us that he currently has a total capital of up to 600,000 birr, including assets.

ET258:
It is a blocks production firm. Its start was encouraging in giving profits. But gradually the firm’s profits came to be decreased. At the very beginning of the study, the firm had six wage salaried(i.e, piece- rate based payment) employees excluding the owner. Later, market inflation on inputs and other raw materials became challenges to the effective production of the products. The firm came to face shortages of income to afford raw material costs and employee payments.

Consequently, the owner decided to suspend three of his employees starting from the 10th round SFD weekly transaction report. He has been giving hope to the suspended employees to take them back and start their work with the firm for several weeks. But this could be done if and only if market stability is maintained and the firm is able to afford all costs related to the employees and work place rent. However, there is no still positive development on the issues raised and finally the owner of the firm took a measure to terminate those employees. Thus, the owner of the firm told the suspended employees that they are totally terminated and they will not be re-offered the employment opportunity hereafter. Currently, the firm has four employees including the owner.

ETH719
The bottleneck he raised is that lack of huge working capitals, as his main focus is that on machinery fabrication, assembling and heavy metal works. Therefore loam should be accessible as much as required to make the game win win situation; the firm can grow its capacity as well as the lender can benefited from collecting interest charges and minimizing default. The spark makes them to work in dispersed environment as a result some employees forced to work outside of the shop even if the space is enough for them under a normal condition.

Description about the order
When we say two thousand one hundred, the actual numbers of beds are twice this number because each bed has two layers( beds); one on the bottom and the other on the top one. Thus the number of furnitures( surface wood) that used as the base for the bede become four thousand two hundred.
These two beds are connected with a ladder. The price for the whole work including the value added tax is over 17 million Ethiopian Birr as described in the order memorandum.

make beds for defense force which are two thousand one hundred in number.He also waits other orders as a result he share portion of the order to other firms who are around him to weld some part of beds. At the end, he will collect these unfinished products and assemble them to make the final products. Thus, he can complete the order in a short time in order to deliver them as soon as needed and asked by the customer (city government of Addis Ababa mayor office). As he said, because of this he can creat job for many unemployed teenagers.

ET319
This respondent engaged in vehicle maintenance service. He was married and has 4 children and he started this business since 2011GC. Previously he used to work in a rental house paying 15000 ETB per month. As his business was growing from time to time, he used to work on the road/asphalt because his working place could not entertain/accommodate his customers and which exposed his employees to sun and rain as shown on the picture below. Not only this he also exposed to intimidation from town authorities for working on and along the road.

But now, by using the money he saved from his business, two month ago he bought the rental house he used to working and demolishing and reconstructing the working area that is more comfortable and adequate enough to entertain all his customers. Not only this but also his employees who were exposed to sun light and rain now get relief from such harsh working condition as shown below.

It’s a leather production firm. Our respondent is doing this job because she has always been interested in the job, she has a good many years of experience and is also a source of income. She feels good when she does her job, she doesn’t give up even if she is not as successful as it should be. Every time we went to talk to her, she told us that she could adjust even if her income was not good and that she planned to expand her business in the future.

When she first started this work, there were a lot of difficult things like borrowing money to start with, not getting a customer, people who were with her at the job stopped working without her being prepared, these were just some of the challenges that she faced.

She’s doing well now, but last week her longtime co-worker left without informing her. There was a good relationship between them and she was good at work but when we asked her in an employee survey she told us that there was not much work and that she wanted to make a better income when she finished school.
They had been working together for 6 years before and then our respondent started her own business and took her out to work with her. It is for these reasons that they have been working very close as a family. In particular, there were three reasons why our respondent became angry with her.
1. her co-worker turned off the phone and was out of work for two weeks without notifying her and She may not be looking for a replacement because she did not think she would leave without telling her.
2. Even before she quit, she had been absent from work several times and had not been able to deliver orders on time.
3. The last reason was that she was wasting her time again and she didn’t have time to look for someone else to work for her.
Our respondent was worried about what was going on until she was sure, so she went to her house and found out. As we have seen today, she has fixed things by hiring two new staff from a training school. 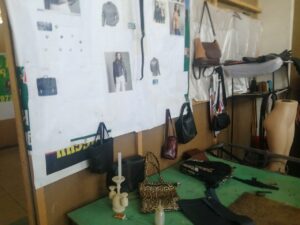 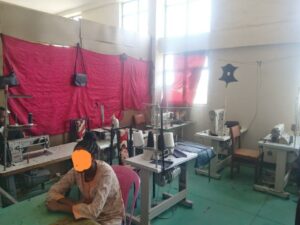 We’ve tried to point out that her workplace is not comfortable in the past.Today, as she tells us more, it is not a beautiful place to show off products, so customers often see it hanging there and the bags she makes to promote her are often different this is because the area is very dusty and its products are easily exposed to dust. In addition to their dirt, she told us that some products are not being used at the time when they are most exposed to the sun and they spend most of their time cleaning and sanitizing products due to this is she succeed her plan is to rent a shop in the area to sell her products.

Another is that there is a bazar before the holiday season, they are registered and are making the necessary arrangements.they think it will have a good income as well.