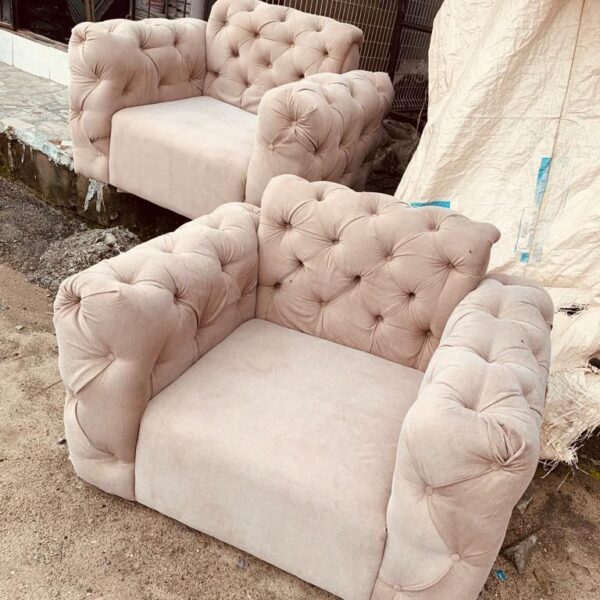 The business has not been so fantastic since the beginning of this year. Most of the time he shares his vision of how he wants to get a place where he can display his products. His present workshop is not fit for displaying his furniture because of the place where it’s located. During my last visit, he showed me the above furniture which he made for a customer. Then he said it would be nice if he had the chance to make different household furniture and put them up for sale, which will increase his income.

Since the Ramadan holiday when most of his apprentices went on holiday, they have not returned to work. When I asked him if he knew the reasons, he said he told them that on returning they should come with their apprenticeship fees, that none of them had made the payment, and that they have been living off him and also learning. Presently he has one of his oldest apprentices who also functions as his assistant. His contract staff are also not showing up because of slow business

This firm owner suddenly got sent away from his shop because his landlord needed it. So getting there today, the shop’s issues are sorted and he has now moved to another place. He converted his former house to now be his new shop. He won’t pay rent now until after August because he still has rent running even though he has moved to another house. He has no longer had employees for some time now.

My respondent broke great news to me today when I got to her firm. She has been aspiring to get a bigger place she could use for her production and warehouse. Luckily for her, she got a place, and the agreement was signed last week.

This firm is a printing press with a staff capacity of about 9. The secretary plays the role of a front desk officer. She welcomes customers and directs them accordingly to employees depending on what they want to do and after service, she calculates the money, records it, and receives the money. On the 14th of June 2022, a customer walked in to print flyers (500 copies). Looking at the quantity, each was charged at N50 making a total of N25000. So approaching the secretary’s desk to make her payment, the secretary calculated and collected N2500 instead of N25000. The customer paid the money and left. During balancing the account she discovered the error and it was late since the customer had gone. The employer had resolved to deduct N22500 from her salary and the secretary’s salary is N25000 monthly.

She discussed this with her employer and begged him to be deducting N5000 monthly which he consented. Meanwhile, she reached out to the customer and explained but the response wasn’t positive. The customer said it’s past and she can’t pay that sum now but she will be paying N2000 monthly.

Now, this is a loss, not to the organization but to the secretary as the money will be deducted from her salary.

As discussed with the firm owner of this shoes and leather materials firm 3-weeks ago, I was able to join him as he visited 1 of his regular suppliers within the city to purchase raw materials today.

Even after the phone conversation, the supplier sought clarification and I was able to administer the survey.

For three consecutive weeks, he has missed his scheduled appointment. His staff is there but he hasn’t been around. I placed calls no response. I sent several messages and he promised to get back to me, but I am yet to get any. I will keep trying.