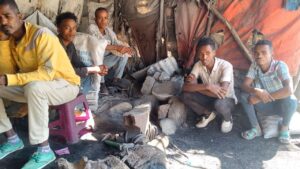 ET-368 is engaged in blacksmith work. When I visited him many times, I found the stock was almost low, very few raw materials for production and his employees were sitting off-job most of the time at usual working hours. When I asked him why, he replied me that his income was decreased from time to time because up to the month of February, his products were not wanted by the farmers. In addition to this, because of current security issue, his customers who used to bring working materials for sharpening from whom he collected money for the service he delivered for them were not coming to his workshop in majority. Only few from the near by vicinity came and got the service. I felt sympathy and concern for his situation.

ETH 535
While we met this respondent, small scale enterprise officials come and record the names of business and our respondent. At the end, they appoint him for meeting at 8:30 a.m on November 26, 2021. As our respondent said, the meeting agenda is related to the current situation. In the last two weeks firms located around that place including this respondent participated in the meeting and requested to support national defense. As a result he also contribute 2000 birr. Due to the current security situation, no firm allowed to work after 6:00p.m(12:00 local time) and enter to work place before 6:00a.m.
This respondent used his free time for drawing different designs and pictures after he returned to home from work place. He replied to my question; why don’t you convert your drawing skills to source of income through drawing different pictures for wedding, worshipping and advertisement, as I have not tried yet rather than using as a vacation. Furthermore, it requires to promote my ability to the public in order to requested for drawing. He weld metals himself alone because he is unable to get employees as soon as he required. Workers who participated in contract works usually move form one firm to another depend on availability. Owing to non availability of orders in the past few days, his workers move to another as a result he can not get now even if he called to them.
He used piece of clothe to cover his face in order to prevent the effect of sparking light. 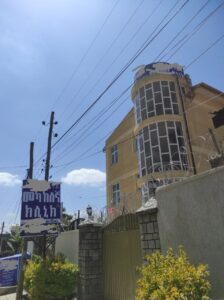 For the past three month our respondent was straggling. The owner of the house she rented they want to increase the monthly payment, they asked her directly but she refuse to pay because if she add the rental cost she can’t be profitable. Her day to day income was decreasing after the corona crisis. So she started to look for a new places which is near to her old clinic and where marginally a lot of customer could be obtain. So the previses rental cost was 23,000ETB so she got a place by 44,000ETB including the turn over tax (4,000ETB). It’s the all building which is G+3 much better than the previous place regarding to the location and space. She has paid 480,000ETB one year payment for the rental and she borrowed the money from her father. Her plan was to pay two years payment because she almost rebuild the building, since she need an X-ray room, and she merge new rooms all of the room are made of bloket. Since she is engineer herself she was able to minimize cost for those. We have showed the image on the weekly observation group.

Even though the area is much better she couldn’t get the income she expect. She has renewed her licence since she has upgraded the service she is giving currently. Because of a change of location a lot of employees have quitted and some of the employee performance has minimised so our respondent have been busy looking after them. And also it been a month and a week since they start working 24hours service in the beginning of the three weeks no patients were getting treated. so around October our respondent were complaining about it. As I mentioned earlier she has changed employees due to many reasons some of quite because of the location, some of them have family’s (children, a maid who learn at night school) so they are not willing to work at night shift so our respondent was forced to employ new employees. But the new employee’s hospitality is not much satisfying since it’s a covid time they are kinda being cold-hearted. We saw our respondent informing her employees how to treat the patient, that they should give them extra care since the clinic is new they should attract new peoples.

Her income is getting better since last week. But she told us that she is paying her employee from her saving. Her income is not balanced yet. Even thou the income is not satisfying, she is the only clinic in the area who work 24/7 so that makes her hopes up. Plus her husband is famous radiologist. Most of the patient come from far places just to get treated by him and his charismatic personality win them over.