ET799 Metalwork
He shared with us that because he had been busy completing the newly bought car repair and maintenance, he recorded no transaction this week. The other thing is that the Technical and Vocational School had prepared a simple and fast metal welding training, and once completed the training, they would be able to create a linkage with the Development Bank to collect a machine. Our respondent was however not interested in taking that training because he felt exhausted and thought it was useless as the machine was is cheap. He said: “if I buy the machine I can hire professionals and once I observe how they work and read the manual for instruction, I can perform it by myself. That’s why I hid here to escape from them.”
He also told us that many companies would asked him professional advice before bidding and would submit bids. He also said that he is efficient and effective in serving customers. In addition to that, he is interested to train newcomers and beginners.

ET-774 Woodwork
He looks a little healthy, but he still has not stopped coughing. As we mentioned before had Covid-19 for more than a month. He recovered and started work recently but his wife then started suffering from Chikungunya and he is taking care of her in his turn. He told us that during his illness he left the firm to his staff members, but they ruined most of the equipment and finished the raw materials he had bought before his illness. They told him that there was no work and income they earned; they didn’t even replace the raw materials they used. He said that “they made me very sad and they want additional money from me beyond what they did on me”.

ETH992
This respondent is engaged in furniture and wood products. As he said, he has submitted for many bids to date but has been unable to win one of them not because of lack of capacity rather fierce competition on estimating operating and other costs as well as setting price of products. One should be good at forecasting on competitors and the market to be benefited from bid.

ETH 715
This respondent has so many photos of products he made so far from different types of products. As a result a customers can see these photos to choose his preference among them or the customers bring their own specification and new models. This respondent put a warning notice in front of machines that says safety first. He also puts other indicators of his office, place of machines and information of history.

These are some photos of products he made so far and kept at the workplace for customers choices. 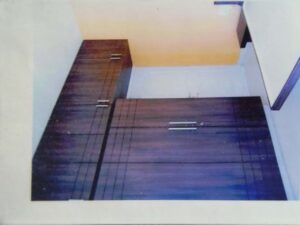 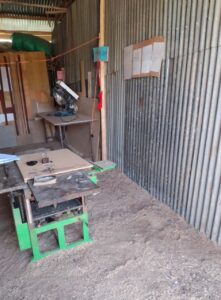 ET529 bought an LG drying machine from the capital bank around October. However, LG marketer’s didn’t inform her this machine could only work for automatic laundry machines until she recognized it by herself. Then, she wrote a complainant letter to the capital bank by stating that the drying machine that was bought by the capital bank wasn’t compatable with her Laundry machine and requested that they replace it with a compatible one. But, they didn’t give any response to her letter. Thus, she decided to sell the drying machine either by using her social network or by posting the machine on the online market. Luckily, last week she sold the machine by giving some deduction for a buyer who sees her online post.

Et 458 Leather products.
When we arrived at this firm, we could not find our respondent. As we have seen in the past, her assistant who had been working with her for some time left and hired new staff and they were the ones we met doing the work. We called our respondent about the working week and transaction. When we first called, she could not pick it up, so she called us later. She told us that she could not attend work because she was in training and called us when she was out for tea. The training teaches them about leather products and how to make new designs, which will be given to them from 2:30 am to 10:00am by University graduates in leather designing around KALITY area. The training lasted after 12 consecutive days, and although she told us there were many benefits, she left the job unsatisfied and, more importantly, wanted to take time to teach new employees, but because of this she found it difficult.

The other respondent is Et455 , as we know, she is engaged in textile work. She has been absent from work for two days this week, Monday and Tuesday, because her son was sick at home. They are in the process of producing a large number of products, as she has completed all the requirements for the holiday Bazar. She told us that taking advantage of the opportunity to sell their products in a crowded place or bazar was very important and that it would have been better if they had not missed the opportunity but had not been involved this year this is due to the fact that almost all of this year, there are serious traffic problems in the country and due to the recent inspections everywhere, the road is long and they have to travel far to work. 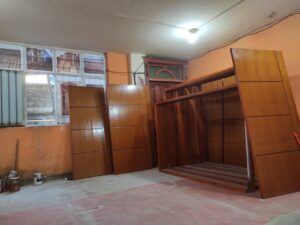 ET129 when we arrived he was organising the furniture he had to finalize. The furniture in the image is for the company I have mentioned before and he is having a lot of orders as he expanded his workplace. He is finalizing his showroom, it will be opened so soon.

ET995 is one of our respondents who is engaged in photo studio service. We couldn’t reach him and it’s been almost more than two months now. We tried to call him through the phone besides going by his firm in person. So we have reported to our supervisor a few weeks ago and we decided that he has indirectly refused after all.

ET641 she has rented a shop for her bag business around Megenagna she hasn’t started yet but she informed us she will open soon we will show you guys how it went so far.

ET159 leather product.
18/12/2021
When I arrived at the firm today, my respondent was doing her best to find a market she had never made these pistol pockets shown in the picture before, but now that she had ordered them, and she was able to practice and produced them and I noticed that she is active in trying and doing new things. 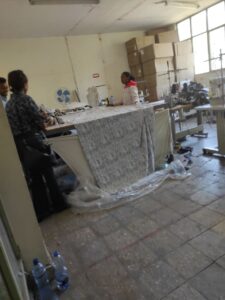 ET384 When we arrived at this firm they were busy because they had a big order coming and our respondent was busy because there was an exhibition he was set to attend whilst his co-work was the one managing. The textiles are eye-catching as well

ET – 489 Cement block
The owner of this firm had an injury to his back this week but he did not quit his job, while he was working he cut off his finger and scattered his staff because he could not work and if he could not work the work could not continue because of shortage of staffs, That the work which should be done by 13 employees is being done by 8 employees. This was because the work in the firm was disrupted due to a lack of budget, which has led to the dispersal of the workers. He also pointed out that there is a grain warehouse in the area where the firm is located and that they have gone there because they got the loading and unloading work at a better price. He told us that the employee who worked on the cement mixing process was helping him by doing two jobs which could be done by two employees and that he could have quit without him because the pressure of the work was too great to handle but he encouraged him by giving some benefits and by paying better than others. He covered the shortage of workers in this way and by himself.

ET – 876 Writing and copy centre
* This respondent has not yet received transportation revenue due to a previous accident.
* An employee stopped working because she got a new and better job.
* The owner hired a new employee to replace the old one.