ET334
Today when we arrived at this workplace the owner and his employees were off the job for a week. The owner replied that his firm regular activities were interrupted because of the damage that happened to the electric power distributor(transformer) that supplies electric power to the surrounding area. The transaction report he gave me today was money he earned from outreach work like home to home refrigerator maintenance.

ET-799 Metal Work
At the time we met this respondent he was repairing his newly bought car. We waited for him a little while and talked to him. He told us that he was undergoing training which was prepared by the urban and Job creation Bureau to start an aluminium job. The trainers of the bureau promised them that after they finished the training they will facilitate a chance to give them machinery they need on loan and our respondent told us that he asked them for Torno work machinery. He also prepared a reclama for an aluminium work in addition to the metalwork which is written jointly. As his word, an aluminium worker will come from Addis Ababa for the work so this is a good opportunity for them. The development bank prepared incentives for those who worked during the covid 19 pandemic and our respondent was one of those chosen to receive the encouragement as they were able to continue their work during that difficult time.
He told us that he already finished the paperwork and formalities to receive the incentive that the development bank prepared for him.

ET – 477 Baltena /Spice and food preparation
As we mentioned earlier, the firm was been closed for several weeks due to renovation. The renovation is now completed and the firm was opened and running this week.

ET – 526 Wood Work
He was renovating the old door when we got there. He was a little calmer compared to the previous weeks. He told us that kebeles had been silent for days about the evacuation so they are working freely but he said:  “I have no idea what may they do after the celebration passed and after the guests returned”

ET623
Business sector: Fish and chicken delivery.
▪️ This business was started in November, 2020.
▪️ He has customers are only Hotels in Adama and Bishoftu.
▪️ He has permanent customers only.
▪️ He has planned to promote His business using telegram and facebook to attract more customers.
▪️ He is planning to open another branch in Bishoftu.

Challenges.
• He was selling more than 1000 Kg of chicken meat to his customers, but now he is delivering less than before he was delivering . The reason is that conferences held at his customers’ Hotel are decreased due to Covid-19 and political cases in Northern Ethiopia. He told me that most of the time he will be busy with orders conferences in the hotels since his customers are only hotels.
• He hasn’t cash register machine or another formal way of payment registration .some of the customers need it due to this he is losing customers.

ET842
Business sector: Printing and Advertising
My respondent/ Firm owner told me that he has fired / his customer service worker for reasons being related to work ethics like lack of punctuality, absence from work without permission and salary-related issues.

ET851
My respondent inferred that the owner has been sick for several days and in addition through this Christmas fasting time their workflow has decreased a lot and so has their income but during the month of January especially at the celebration of Epiphany, their income would increase twice as of now and that their workflow would be higher and they will become super busy at such times.

Et 517 When we met her today, she was not happy about her work and for some reason, she’s in a lot of trouble, and her job isn’t making any money this is because of the low-quality raw materials(Teff). This has so far have lost 14 of its seventeen customers, leaving only three. She told us that she had gone to the place where she was buying raw materials or teff to explain the situation to them and to find a solution, but they could not agree and it turned out to be a quarrel. In addition to the poor quality of the raw materials there was a power outage for six consecutive days this week, which is almost completely non-existent, and could lead to the loss of existing customers due to this the former staff members also said that they do not want to sit still and now she is alone. As a result, her work is declining unexpectedly and she has not been able to earn any income and is currently unable to repay her 7,000 birr loan for raw material. 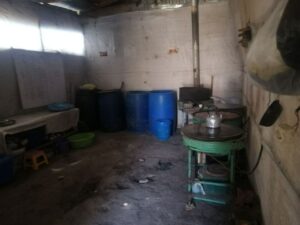 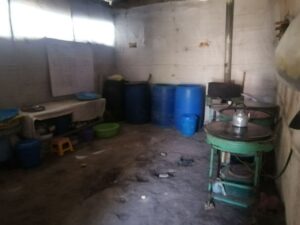 That’s how we found them when they stopped working because of a power outage.

ET358 Woodwork
8/12/2021
I feel like I am writing more and more about this respondent, but this one is different from the others. For example, when I go to the milling service firm, I noticed the same activity, but I am always surprised by the high level of motivation for work at this firm. They always plan to use their potential to control the market. Due to the current crisis in the country, the demand for such products has decreased, but they have been able to find a good market by producing new types of products without any order like that shown in a picture. As a result, they are finding a good market. 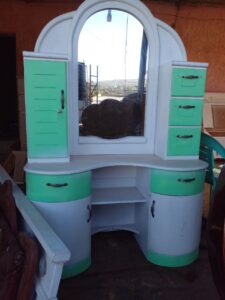 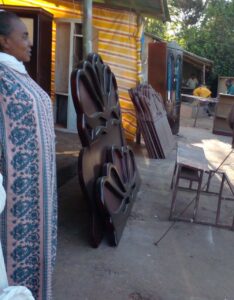 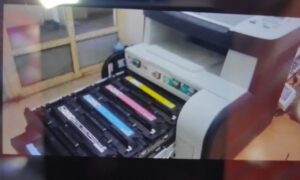 ET921 is one of our respondents who is engaged in the printing and advertising sector. Firstly to conduct the survey we had a hard time to get our respondent. To get the weekly report we had to go to the firm three times but finally, we got our respondent. He was busy so we tried our best not to take his time as much as possible. While my colleague ask the survey I was observing and heard that they borrowed a printing machine without there boss permission and something went wrong and they are murmuring about it. While taking the weekly report we asked them and they told us that the machine they borrowed got broken accidentally. They are trying to sort it out though.

ET717 While we are going to meet our respondent we meet ET717 coincidentally. He was delivering his product to his customer himself and his customer was appreciating him for his work. We could tell that he was quite satisfied.

ET356 a firm with a rental service. The firm either have income nor expense. It’s been almost more than a month since they got income.

ET995 we still can’t reach him but we are trying our best. We checked by going to his firm, the employee hasn’t talked to him for a while his wife is the one who is managing the firm but mostly through the phone.

ET978 when we arrive at the firm there was no patient at all. While taking the weekly report our respondent said this business is dying from time to time. And she slept in her firm when she was tired and the 24/7 service they are providing is useless no one is coming…

ET129 When we arrived at this firm, the saleswoman was someone new and because of this, there was an awkward vibe. We called him and he asked us to come back a few days later since he was busy organising his new showroom and we do the survey and the weekly report through the phone. We left and wished him the best.

ET384 When we arrived he was working with his employees they were quite busy. There had a big order for T-shirts and we just asked him the survey and he told us he will send us the weekly report through telegram Sunday or before Sunday.

ET – 385 Cement Block
As we mentioned earlier, the Housing Development Corporation did not provide operating funds due to budget constraints. As a result, the firm has stopped working for 3 weeks and there was no transaction. They told us that they had applied to the corporation and had not received any response yet but that if the budget was released they could start work next week.